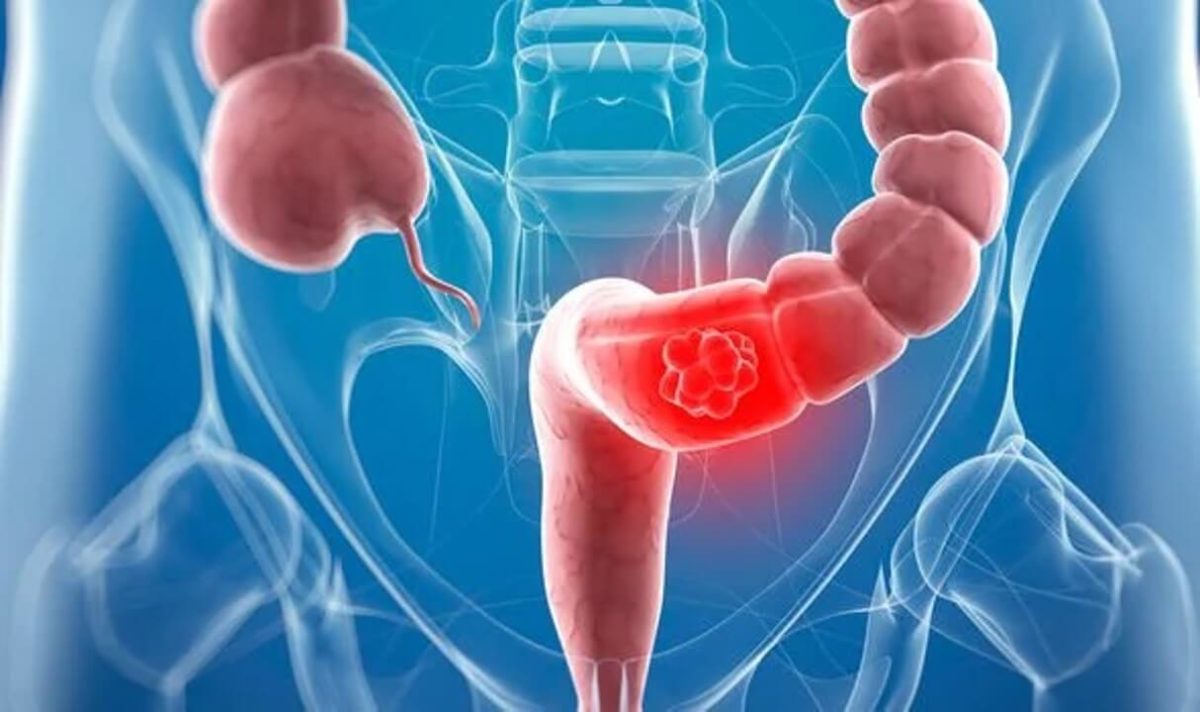 So how does one deal with this situation? Firstly, almost all patient will require chemoradiation before surgery in this situation. This may increase the chance of sphincter preservation. Also, laparoscopic or minimally invasive surgery is usually equally effective in saving the passage, with the additional advantage of lesser scar and pain. Also, expertise for sphincter saving procedures varies from center to center. So, we must be sure that the facilities are available. Lastly, without surgery, cure is highly unlikely unless the cancer is a squamous carcinoma and not an adenocarcinoma, in which case chemoradiation may be sufficient.

Let us prioritize our perspectives: 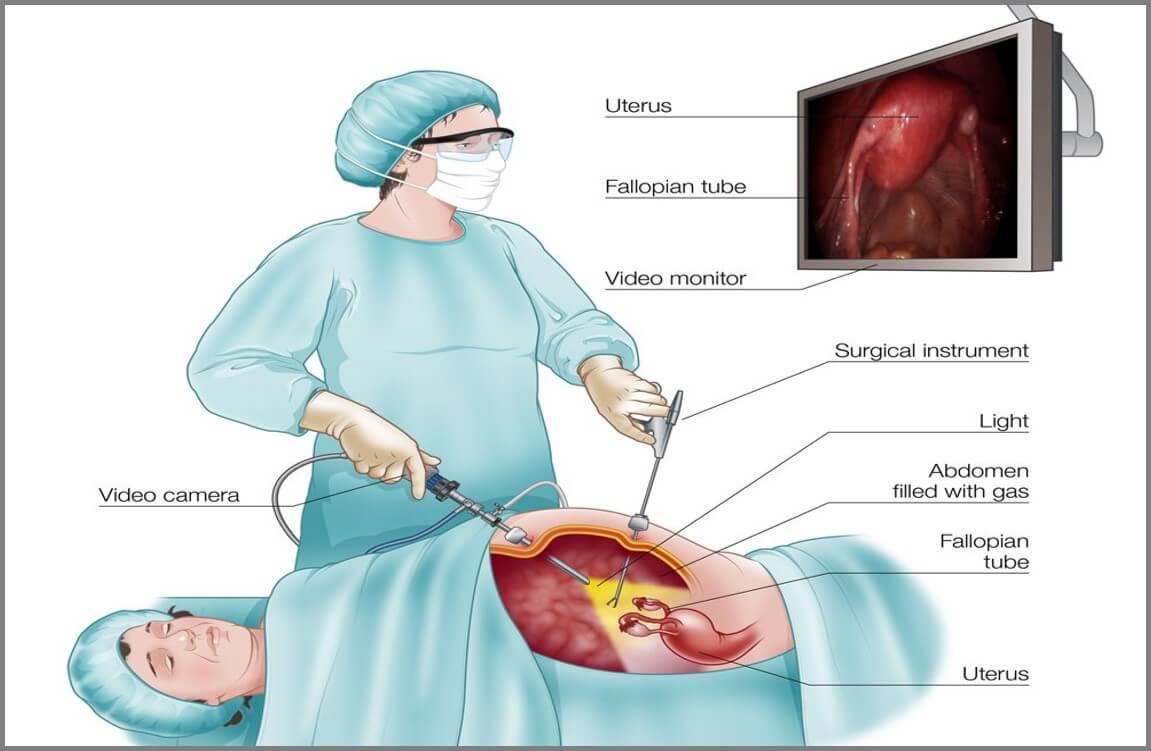 The best, and usually only, chance of cure in colorectal cancer is surgery. Minimally invasive (keyhole) surgery includes laparoscopic and robotic surgery techniques which have shown to be beneficial for patients in terms of faster recovery after the operation. There remains a certain fear that such minimally invasive surgical options may not be as good as conventional open surgery for cancer removal.
There is now sufficient scientific evidence to support minimally invasive surgery for cancer, especially colorectal cancer. That means that the outcomes/survival of patients is similar if the surgery is performed with a large incision or through keyhole incisions. The lesser pain and faster discharge with quicker return to routine activity are additional advantages of keyhole surgery. Having said this, there are still certain colorectal cancers that even the most adapt laparoscopic cancer surgeons would still prefer to perform using conventional techniques. This can be left to the discretion of the treating oncologist.
In short, the vast majority of patients need not fear laparoscopic surgery for colorectal cancers and, in fact, will fare better and heal sooner with this technique. The opinion of the treating surgeon should be respected, and any concerns can be easily dealt with by the treating oncologist. 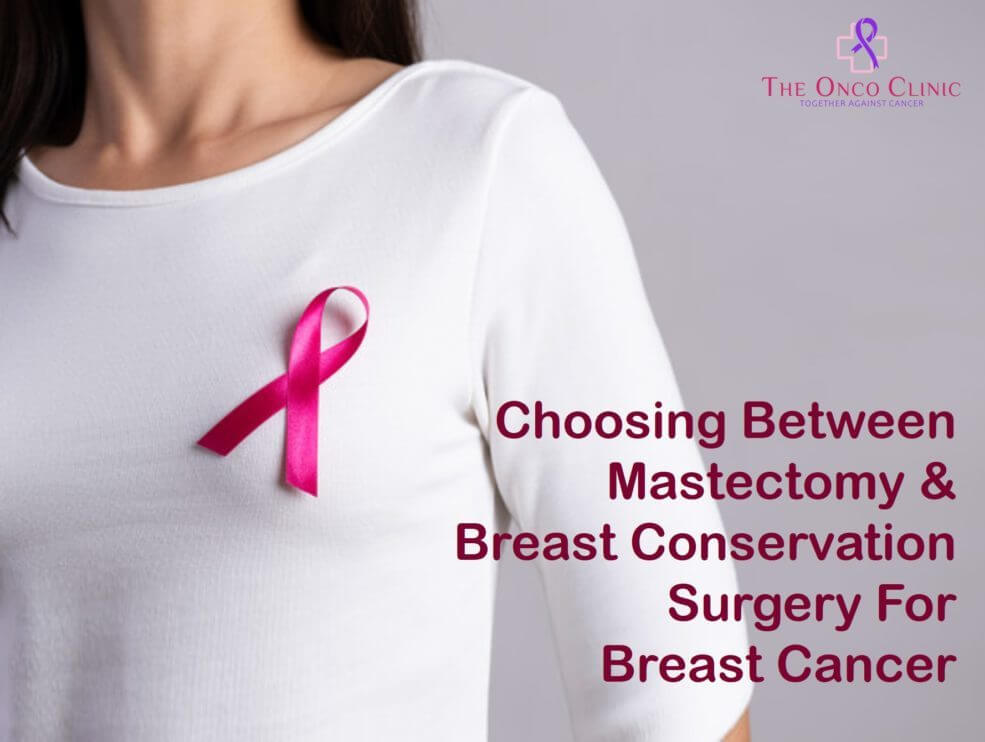 Discuss with your surgeon to find out if you can choose between mastectomy and breast conservation surgery plus radiation therapy.

Take time to study your options and weigh the risks and benefits of each and choose the surgery that’s right for you. Your preferences, priorities, accessibility to medical centres, finances and lifestyle all play a part in your decision. You may choose to have breast-conserving surgery because you don’t want to lose your breast or having a mastectomy may give you peace of mind as it removes more breast tissue. Talk to your doctor about the advantages and disadvantages of each type of surgery or you may take help from patients or breast cancer survivors who have had each type of surgery.

Survival after any surgery is the same, no matter which option you choose. Several studies show that women with early breast cancer that is stage 1 or stage 2, who have breast-conserving surgery followed by radiation therapy have the same survival rates as women who have a mastectomy. This means that, if there no medical reason for you to have one rather than the other, your surgeon will give you a choice between the 2 surgeries.

The decision whether you will need chemotherapy, hormone therapy and/or HER2-targeted therapy is not affected by the choice of surgery. However, radiation therapy will be given to you, if you undergo breast conservation surgery. Drug treatments are given according to the characteristics of the tumour, not the type of surgery. 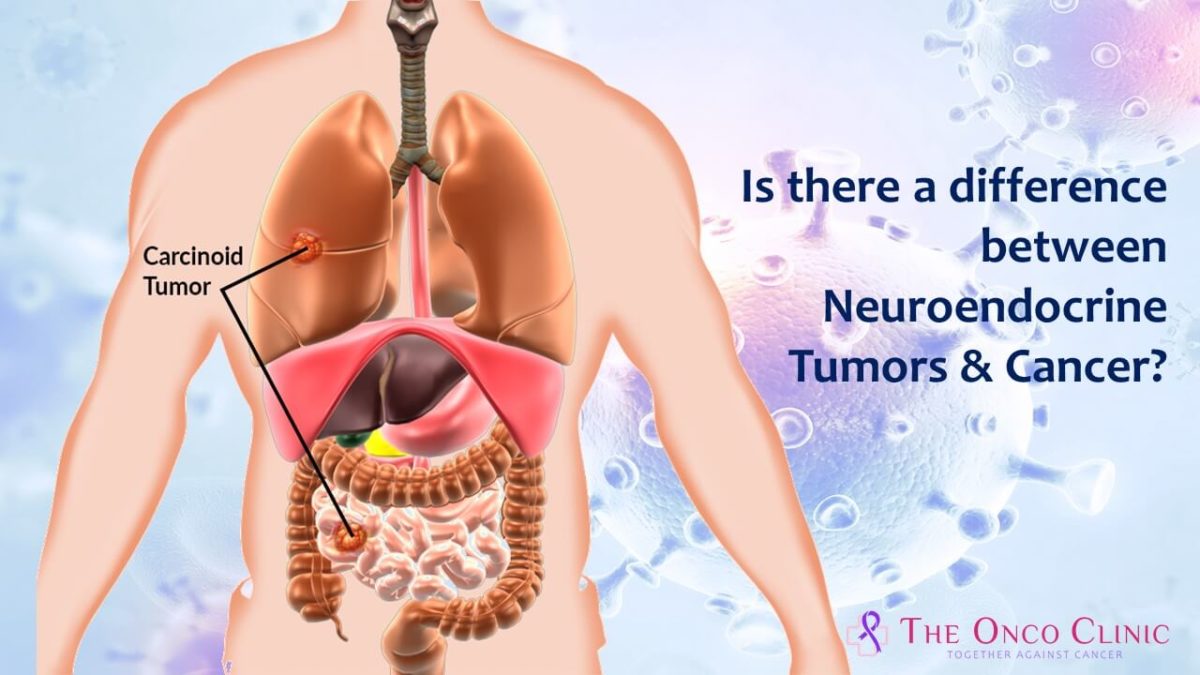 Neuroendocrine Tumours (NETs) have featured in the news quite frequently in recent times. This is partly due to various celebrities being diagnosed and sometimes succumbing to this disease. People like Steve Jobs, Aretha Franklin, and the actor Irrfan Khan, closer to home. The natural tendency is to assume that this disease is primarily related to the brain. Not many realize that this is mainly an abdominal disease which tends to mimic cancer. Although it is a rare tumor, the incidence seems to be increasing, even our country.

NETs mainly affect the abdominal organs such as pancreas, intestine, appendix, stomach, as well as other organs. It can also affect the lungs and other organs as well. Many NETs are detected unexpectedly at regular check-ups or while investigating for something else.

The good news is that most NETs do not behave like typical cancers. The low-grade NETs (grade 1 and 2) are slow growing tumours which have high cure rates. There are also many treatment options which are well tolerated by patients. Some NETs are functional, which means there are hormones secreted by the tumour into the blood stream causing symptoms related to that hormone. For example, if insulin is secreted, then the blood sugar tends to get extremely low, causing giddiness. Unfortunately, high grade NETs (grade 3) tend to behave like cancers, and generally require chemotherapy.

NETs usually require a special PET scan called a 68-Gallium PET scan or a DOTA-TOC scan. This helps to identify the tumour and its spread. The treatment is usually surgical. Other options like targeted therapy, long acting octreotide, peptide therapy, and others are also effective.

To summarize, NETs are a relatively rare group of tumours which are usually ‘well-behaved’, with numerous treatment options, the primary modality being surgery.

Although Liver Cancer or Hepatocellular Carcinoma is usually detected at later stages, many patients can still benefit from surgery.

When a patient is recommended surgery, one of the common questions is-

“Which is Better, A Liver Transplant or A Liver Resection (Surgery to Remove Part of The Liver)?”

Here are the basic factors to be taken into consideration before one decides:

If the tumour has developed in a background of cirrhosis (Hepatitis B/C, Alcoholic, Severe Fatty Liver), that means the entire liver is damaged. In this situation, a transplant is preferred since the Cirrhotic Liver will trouble the patient again with liver failure or a new tumour formation. If there is a single Tumour, even if large, in an otherwise Normal Liver, Liver Resection is a safer and more feasible option. Transplant requires a donor and the expenses can be prohibitive.

In other words, a liver resection is a good option for patients with Non-Cirrhotic Livers especially when costs and Donor availability is a problem. In the unfortunate event of Tumour recurrence after resection, a Salvage Transplant can be offered to many patients. A Hepatobiliary Surgeon will be the best guide for patients facing this situation. 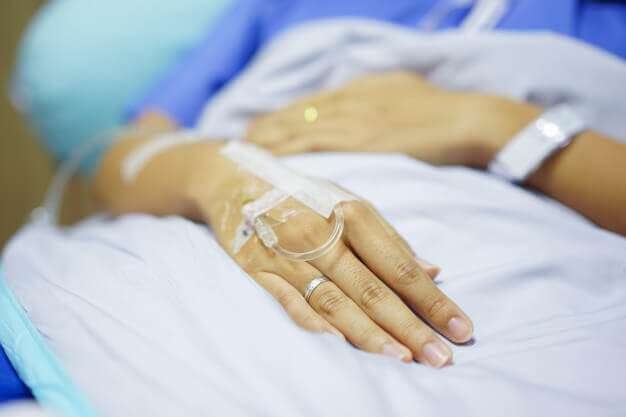 The vast majority of patients will undergo surgery first for colon cancer if the tumour has not spread to other parts of the body. This is done with an intent to cure. After around a week, the histopathology (biopsy) report is in. Usually by this time the patient is discharged and doing well. The question now is whether chemotherapy is required or if observation with regular check-ups are enough. The basic rule of thumb is that chemotherapy is suggested if the chances of tumour recurrence is relatively high, based on scientific evidence.

Cutting to the chase, most patients in India will require chemotherapy since the stage at which the cancer is detected is usually rather advanced. Very early stage tumours are mainly detected on routine colonoscopy (general check-up without symptoms) so are incidentally diagnosed. Once a patient develops significant symptoms, it is usually at a stage which requires chemotherapy.

Specifically, patients with symptoms of significant obstruction (extreme difficulty or inability to pass stool) or severe bleeding, should receive chemotherapy. Patients in which the tumour has penetrated the wall of the colon or if lymph nodes are involved will require chemotherapy. Poorly differentiated tumours should also be considered for chemotherapy. If the report reveals stage 2 disease (pT3N0) with no other poor prognostic features, an MSI (Microsatellite Instability test) is advised. This helps in the decision about the benefit of adjuvant chemotherapy.

To conclude, your oncologist is the best person to decide treatment options in consultation with a multidisciplinary tumour board. Organ-based disease management clinical groups ensure best possible outcomes for patients. 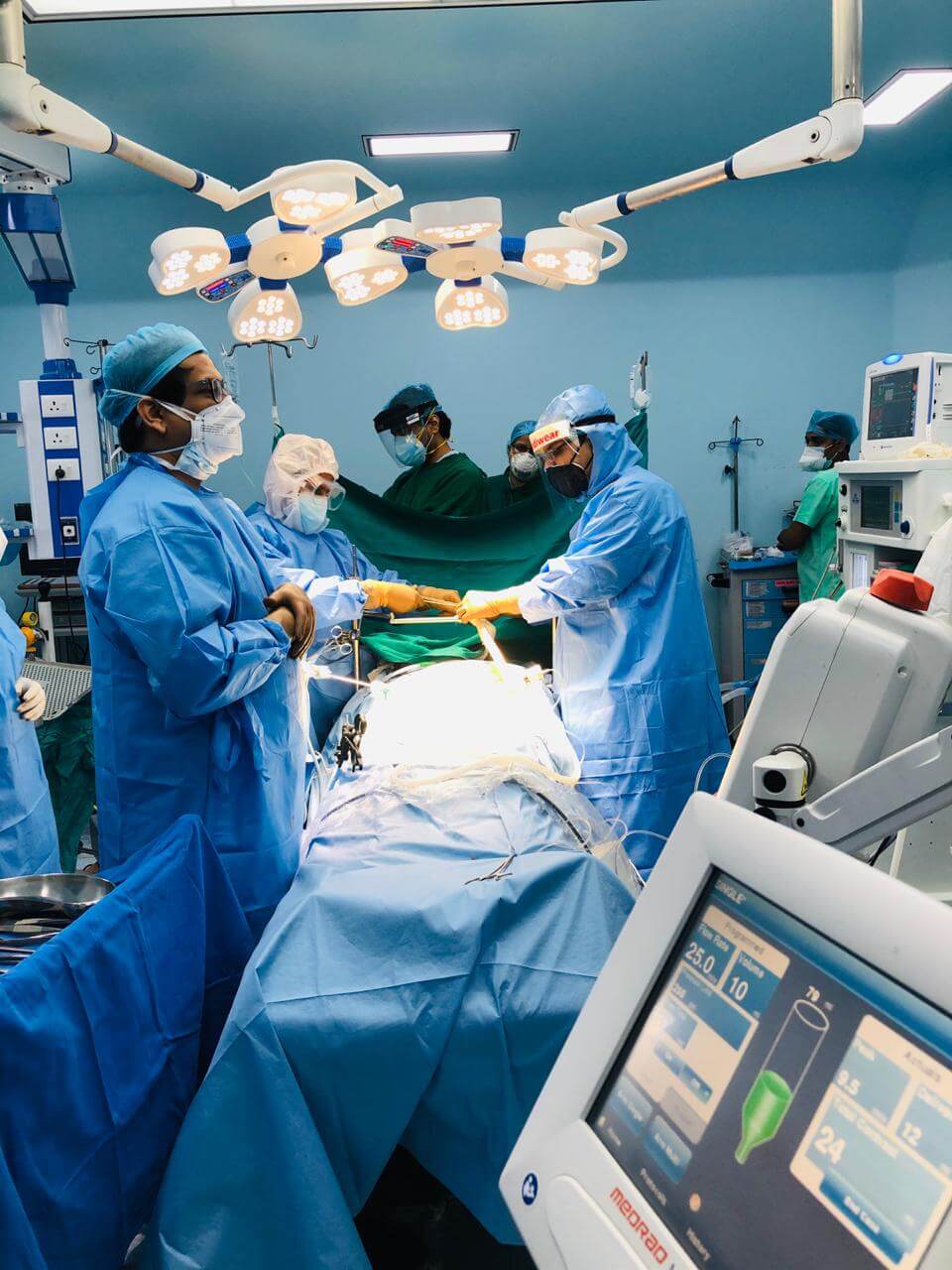 Gurugram (Haryana) [India], July 12 (ANI): Paras Hospital in Gurugram became first in the city to perform Pressurised Intraperitoneal Aerosol Chemotherapy (PIPAC) on a patient who had run out of options after her ovarian cancer recurred for the third time.
A 35-year-old Rupshikha Thakur (name changed), whose body had stopped responding to traditional treatment after undergoing cycles of strenuous chemotherapy, targeted therapy and immunotherapy, became the first to undergo the procedure in the millennium city under the expert team of surgical oncologists led by Dr Vinay Samuel Gaikwad, Associate Director, Surgical Oncology, Paras Cancer Centre.
Dr Vinay said that PIPAC is a palliative option of treatment for patients suffering from ovarian, gastric, colorectal, appendicular and certain other cancers which have spread within the abdomen.
“The PIPAC process is a combination of surgery and chemotherapy. This is a laparoscopic procedure in which a keyhole (incision) is made. Using a special device, standard liquid chemotherapy that has been converted into gaseous/aerosol form is sprayed directly onto the cancerous area. After the procedure, the residual fumes are absorbed through a special filter and the incision is closed. In fact, after the procedure, the patient can be discharged on the same day or the next,” Dr. Vinay said.
What makes this procedure unique is that it can be used when other treatment fails. Also, the patient’s general condition does not have to be very good in order to tolerate the procedure.
“Side-effects that are commonly seen in other procedures such as hair loss, kidney problems, liver problems, vomiting etc, are either minimal or not seen at all. Any patient with peritoneal cancer, who can withstand a two-hour surgery under anesthesia, is compatible with this therapy. Therefore, most patients can tolerate this procedure very well,” he said. (ANI)

Disclaimer: The views expressed in the article above are those of the authors’ and do not necessarily represent or reflect the views of this publishing house. Unless otherwise noted, the author is writing in his/her personal capacity. They are not intended and should not be thought to represent official ideas, attitudes, or policies of any agency or institution.

Design And Developed by Peepstruck